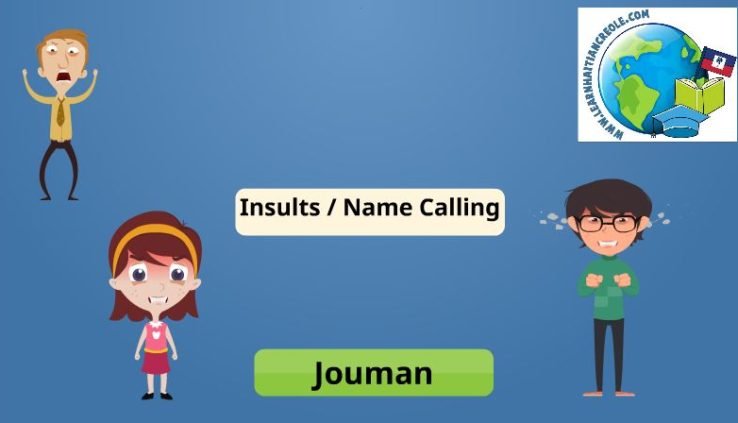 This post will cover words that can be used to insult someone in Haitian Creole. It will also include common words used for name-calling. I tried not to include Haitian Creole profanity in this video although there are a couple of words in there that some might view as profanity. Keep in mind that calling someone any of these names or words don’t necessarily make it true. They are just name-calling and those are usually not pretty.

Landjèz = We use this word when someone is nosy, Someone who likes to gossip, People who talk about other people’s business too much

Gouman = A greedy person. The person basically eats too much. This type of greed is food-related.

Saf = A greedy person. The person basically eats too much. This type of greed is food-related. It’s the same as calling someone gouman.

Tèt Grenn = Nappy or Kinky hair. Don’t take it personally if someone ever calls you that. It’s just a way to insult someone, it doesn’t make it true.

Nen Vonvon = It’s used to tell someone he or she has a wide nose.

Lang Long = The two words mean a long tongue but it really means a nosy person. Someone who likes to gossip. The person might also lie in the process.

Blofè = Someone who lies. They like to make it look like they are something they are really not. Maybe they brag about having a lot of money but it’s all a lie.

Dwèt long = The two words mean long fingers or a long finger but it really means thief. It’s used to call people who take things that don’t belong to them. Maybe someone comes to your house and all of a sudden your bracelet is missing. You would call that person dwèt long. Kind of like saying sticky fingers in English.

Anba Chal = This is used to call someone who does things under the table. You can’t really tell what they are capable of doing. Maybe the person pretends to be a law-abiding citizen but they lie about everything or they are doing illegal stuff. That person is anba chal.

An soudin = This is the same as anba chal. It’s hard to figure out who they really are as a person.

Rizèz = This is used for female only. They do something but they say they didn’t do it. It’s like calling someone a liar but this type of lie is related to something they did or something that happened and they are lying about it.

Rize = This is used for male only. But it means the same thing as rizèz.

Je chèch = This is the same as rizèz but you can use it for males and females. The two words mean dry eyes. They do something wrong but they say they didn’t do it. They lie with a straight face. It’s almost believable.

Sou moun = People who are all over others. They like to invade people’s space. They act like they’ve known you for a long time even if it’s only been 2 minutes.

Tèt Zonzon = Short-hair or no hair. It’s just a way to insult others. It’s not really a way to describe someone with short hair which would be ‘cheve kout’

Jouda = This is a nosy person. They like to be in other people’s business. They like to report what they’ve seen even though it was not their business.

Tripòt = Another way to call someone nosy. Tripòt is also a way to gossip. If you see someone eating fish and you go tell the neighbor what you saw. It’s ‘tripot’ because it was not your business or the neighbor’s business.

Vakabon = Vagabond or Bum. If you have a son who just wants to play ball and not go to school, you would call that kid a vakabon. It pretty much means they are not doing anything good with their time.

Malandren = This word is the same as vakabon but it’s more severe. It means the person is really doing bad stuff. But then someone can call you that out of spite and not necessarily because you’re doing anything wrong.

Vakabòn = This one is for female only. It usually means slut. Sometimes some people will say the person has ‘pye leje’ which means their feet are light. It’s another way of saying slut. You can also use this word to describe a woman who is not doing anything useful with her life. Maybe you have a young girl who wants to hang out with friends all day, not doing anything productive. You don’t know what they are doing. You can call them a vakabòn. (This can be a Haitian Creole profanity)

Pèlen = Slut (This word is a Haitian Creole profanity)

Piten = Slut (This is another Haitian Creole profanity)

Lach = Coward (This word also means loose. Like if you tied something and it becomes lose we would say ‘li lach’)

Malpwòp = This is a dirty person. Maybe your kids don’t want to shower or clean their rooms. You could call them ‘malpwòp’. Remember ‘pwòp’ means clean. If a girl or woman like to sleep around with different people, someone might tell them ‘ou malpwòp twòp’ which would be another way of calling them a slut.

Lougawou = Werewolf, Evil, Devil. This word is very common in Haitian because there are some people who still believe they exist and kill other people’s children, especially babies.

Kochon = Pig. Although this word means pig, it’s used to insult others. If someone calls you a kochon it pretty much means the same as ‘malpwòp’

Welcome to Learn Haitian Creole. This site provides videos in Haitian Creole for those who would like to learn the most common language spoken in Haiti. We currently have videos teaching about family, Haitian food, body parts, words and phrases in Haitian Creole, short conversations, travel to Haiti, communicating with your child if you are an adoptive parent, animals, and many more videos to come. Please subscribe to my YouTube channel and this website for current and future videos.  YOUTUBE CHANNEL

We now offer all our videos on a podcast so you can listen from anywhere. Click here to listen. PODCAST

We now have a Facebook group for those who would like to have more interactions with like-minded people. This is a safe place to ask questions. We also welcome those who are already fluent and would like to help fellow members. FACEBOOK GROUP

Disclosure: This page may contain affiliate links. As an Amazon Associate we earn from qualifying purchases. Clicking on these links will not cost you any extra fees.